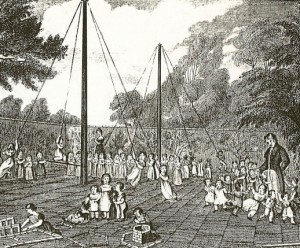 Education through Nature and Play

Wilderspin was the first to really develop the use of school grounds for playgrounds and gardens.  A fully developed Wilderspin playground was brick paved, with trees, vines, flower beds, and some even had gardens with vegetables and cereals.

Intended as an area for exercise, stimulation of the senses, and co-operative play, it “may be compared with the world, where the little children are left to themselves, there it may be seen what effects their education has produced”.

The Infants’ Playground or “outside classroom” was accessed directly from the infant schoolroom – the two spaces, in essence, working together as one.

The illustration above was included in Wilderspin’s books and shows children and their master and mistress in the playground.  Some children are on circular swings, others playing with special building bricks.  There are trees, flower beds etc.  Meanwhile the master and mistress, each surrounded by jolly children, look on but don’t interfere with the children.  There is a circular swing, sometimes there was one for boy and another for girls.  This one has a hurdle for jumping over too.  The children had to use the swing co-operatively to swing together.

Many schools of Victorian or Edwardian date only had surfaced ‘drill’ yards, and it was not until the mid twentieth century that ‘softer’ playgrounds and gardens became regular features of new schools.

It is remarkable to think that Wilderspin was advocating activities like cultivating vegetables, cereals, fruit trees and flowers around the playgrounds, and going with children on ‘nature walks’, in the first half of the nineteenth century.  And it’s a concept many modern schools feel is important today.