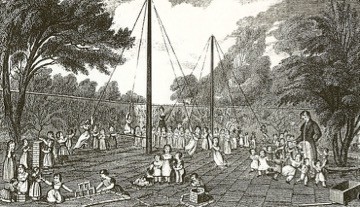 The Playground was an essential part of Wilderspin’s schools.  He believed that undirected ‘free’ play was a way of “developing character and moral behaviour through co-operation and shared play”.

Wilderspin was the first to really develop the use of school grounds for playgrounds and gardens, and to use special equipment there. A fully developed Wilderspin playground was brick paved, with trees, vines, flower beds, and some even had gardens with vegetables and cereals.

It had equipment, such as swings. The early use of hoops, sticks, whips and tops etc. proved problematic so were later abandoned, replaced only by building blocks.  Intended as an area for exercise, stimulation of the senses, and co-operative play, it “may be compared with the world, where the little children are left to themselves, there it may be seen what effects their education has produced”.  The teacher was not to interfere, but to observe either in the playground itself, or from the masters house window.

The Infants’ Playground was separate from the yards used by the older girls and boys.  The “outside classroom” was accessed directly from the infant schoolroom – the two spaces, in essence, working together as one.  It was characteristically large with six times more space per child than the boys’ and girls’ yards.

An illustration included in Wilderspin’s books shows children and their master and mistress in the playground.  Some children are on circular swings, others playing with special building bricks.  There are trees, flower beds etc.  Meanwhile the master and mistress, each surrounded by jolly children, look on but don’t interfere with the children.  There is a circular swing, sometimes there was one for boy and another for girls.  This one has a hurdle for jumping over too.  The children had to use the swing co-operatively to swing together.

Many schools of Victorian or Edwardian date only had surfaced ‘drill’ yards, and it was not until the mid twentieth century that ‘softer’ playgrounds and gardens became regular features of new schools.  It is remarkable to think that Wilderspin was advocating activities like cultivating vegetables, cereals, fruit trees and flowers around the playgrounds, and going with children on ‘nature walks’, in the first half of the nineteenth century. 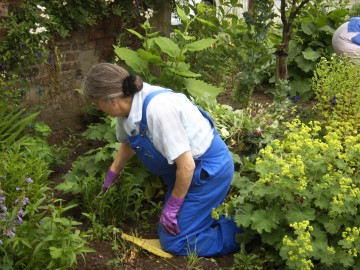 Samuel Wilderspin believed that gardening and the appreciation of nature were an important part of the child’s development.

Prior to September 2010 volunteers were constantly weeding bare beds. The topsoil having been brought from Alkborough was sandy and full of weed seed – chickweed, pineapple mayweed, coltsfoot, nettle, dock and willow herb to name a few.

The Outreach Group from Scunthorpe maintained and still do the north east corner of the garden and last year put on a spectacular display of sunflowers. The sunflowers now on the north side are self set from last year.

School children also have been involved. One year a group planted vegetables and last year another group planted daffodil bulbs, which gave us a wonderful splash of vivid yellow this spring. We look forward to next years display.

In August 2010 we asked Sue Hoy, who was the Head Gardener at Normanby Hall for her expert advice on creating a Victorian Garden. Sue came to view the area and emailed a list of suitable plants and shrubs – a copy which can be seen in the shop. Unfortunately for us Sue retired shortly after this.

Late September 2010/early October 2010, using Sue Hoy’s list as a guide, volunteers planted a number of shrubs to get established over winter before introducing the perennials. We did not however expect such a hard winter and were relieved to find only one shrub had died.

A few perennials and the little box hedge plants donated by various people were also planted.

In May 2011 Andrew Robinson, the local landscape gardener, came to prune and cordon the apple trees on the west facing wall. The apple trees are Victorian varieties. Andrew also supplied numerous perennials which volunteers planted. We now eagerly await the results of our efforts.

As you will realise gardens need time to get established and will evolve over the coming years. In the future we hope to plant old fashioned roses, sweet smelling honeysuckle and a low lavender hedge. Also we have plans to make a bird table and compost bin.

We are only volunteers and not trained gardeners so any comments on work so far and the correct name of plants will be valued.